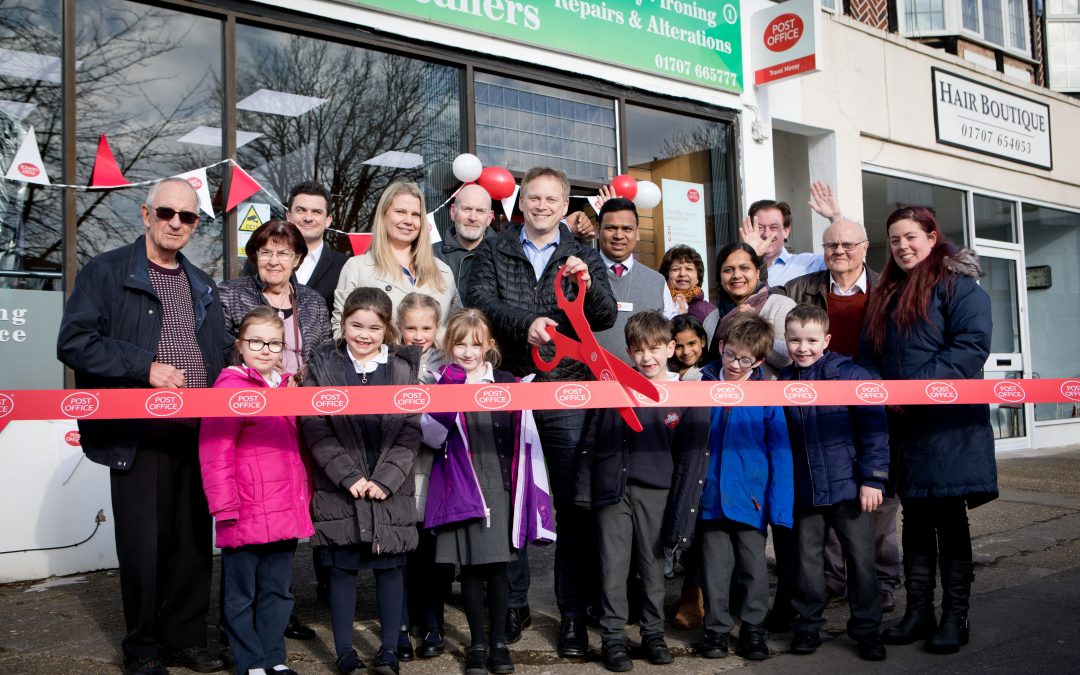 Grant Shapps, MP for Welwyn Hatfield, has cut the ribbon at the official opening of the relocated Brookmans Park Post Office, along with new Postmaster Sheikh Islam and pupils from nearby Brookmans Park Primary School.

The Post Office is now located at Charlie’s Valet, 1 Bradmore Green, Brookmans Park, AL9 7QW – very close to the previous location. The relocated branch will be open for an extra six hours a week, including earlier opening and later closing on Saturday afternoon.

The move was part of a major modernisation programme across the Post Office network designed to make it easier for customers to do business, through longer opening hours and modern open plan environments.

Opening the Post Office, Grant said: “I am delighted that Sheikh Islam has taken on the Post Office within his existing business in the heart of the community. He has previous Post Office experience and is a popular local retailer.

“I have worked closely with Sheikh as well as the former Postmaster Mohammed Ashraf to make the transition as smoothly as possible, and I would like to thank Mohammed’s landlords for their patience. I know the longer opening hours will benefit the whole village.”

Mr Sheikh, who has run his Brookman’s Park dry-cleaning business since 2014, said: “The community is delighted that they still have a Post Office in the village centre and they appreciate the longer opening hours.”

Suzanne Richardson, Regional Network Manager at Post Office Ltd, said: “We are making it easier for customers to get their cash, send and collect their mail and do their banking because we know how important these services are to local residents. We are confident that this vibrant new-style Post Office at the heart of the local community will meet customer needs. This modernisation is part of a major investment programme, the largest in the history of the Post Office and will secure services for the future.”