To mark ‘Blue Monday’, often said to be the most depressing day of the year, Grant is launching a new report: Online Suicide Prevention: A Pro-active Strategy for Government and the Internet Industry.
The report is the product of a two-year research programme which included an Online Suicide Prevention Summit held in Parliament in May 2016, alongside a ‘Call for Evidence’ from leading organisations and individuals involved in both suicide prevention and the internet industry.
The research identified some extremely positive and deeply negative aspects of the internet and social media, with regard to suicide prevention. And, the final report (attached) makes a series of specific recommendations for both government and the internet industry; in order to make the internet a positive and safe environment for those who may be vulnerable.
The report has been welcomed by organisations such as Samaritans, Barnardo’s, Twitter and Google. Indeed, an earlier draft caused Microsoft Bing to immediately update their search algorithms to prevent dangerous results, encouraging suicide, appearing.
The launch event taking place in Parliament tomorrow will be attended by major suicide and mental health charities such as Samaritans and internet providers and social media giants such as BT, Twitter and Google. 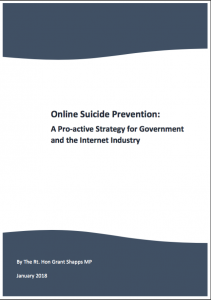 Read the Q&A about how this report came about.