The local MP has received representations from residents about the taxi rank being moved to Stonehills and from shopkeepers about a reduction in parking spaces.

During the meeting with HCC’s Rupert Thacker and Anushia Vettivelu, Mr Shapps sought assurances that earlier problems with the trial version of the scheme would be addressed in the final design. Speaking after the meeting in Howardsgate, Mr Shapps said, “The scheme has now been redesigned and the taxi rank will not now be moved to Stonehills. In addition, the number of ‘lost’ parking spaces will now be minimised with only the very end of Stonehills being fully pedestrianised. I thought it was a worthwhile meeting and it was good to see Hertfordshire County Council and the Borough taking into account the concerns raised by residents and the Business Improvement District (BID) which represents local traders.”

The MP’s meeting started at the new Bus Station and proceeded around the town centre, Grant spoke of his ‘concerns’ about some of the measures and the feedback he’d received from his constituents.

Hertfordshire County Council in partnership with Welwyn Hatfield Borough Council is developing a scheme to enhance the area around Welwyn Garden City town centre. The aim of the scheme is to reduce traffic circulation in the town centre. As part of the improvement plans a consultation was launched including a month-long trial period that had implemented the proposed changes.

The consultation closed on 24th June 2018 and further updates will be announced in due course and will be published here: www.hertfordshire.gov.uk/about-the-council/consultations/transport-and-highways/wgc-consultation.aspx 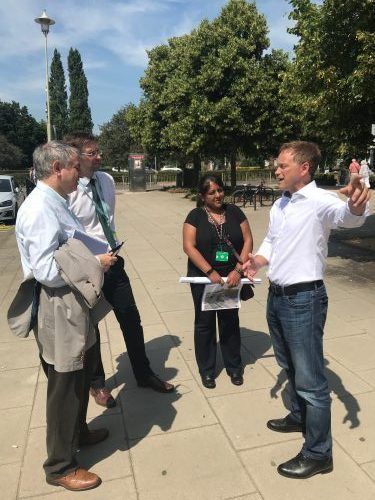