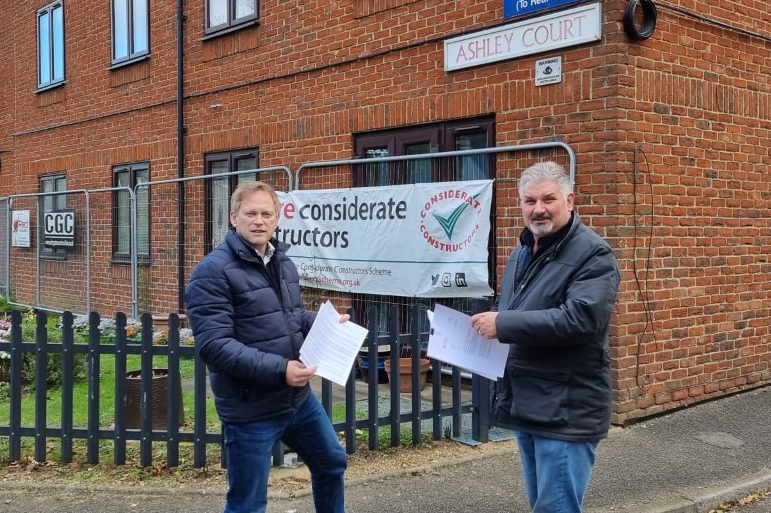 Welwyn Hatfield MP Grant Shapps has won refunds for residents of Ashley Court, Hatfield, who were forced to leave their homes due to an electrical fire, and then subject to unfair service charges for housing they were unable to reside in.

It has been over a year since the residents of Ashley Court were forced to leave their homes due to an electrical fire.

During this time residents, many of whom are vulnerable and require care, have been off-site – residing in temporary accommodation.

Previously, residents of Ashley Court were billed £225 per month in service charges for housing they had not occupied.

This monthly fee included charges for various services, including a Scheme Manager and Caretaker costs, which residents were not benefitting from.

In December 2021, local MP Grant Shapps wrote to Sanctuary Housing, the housing association responsible for managing Ashley Court, expressing his concern about “the impact on his constituents” nominally resident there.

Sanctuary Housing responded to Mr Shapps’ letter but at that time did not agree to waive the £225 a month charge.

In February, Mr Shapps wrote to the association once again (below), this time saying that he was putting it “on notice” over its unfair treatment of residents.

In a major victory for the residents, the association apologised, saying that it had got its “approach wrong” regarding Ashley Court, and that it would be refunding service charge payments to residents as appropriate.

The association also said it would refund payments for deceased residents to their respective estates.

Sanctuary Housing stated it would be conducting a “more detailed review” of how the residents of Ashley Court were put in their previous unfair situation and would share its findings with Mr Shapps’ office.

The association agreed to meet with Mr Shapps in March saying that its representative would apologise in person, and that it would put itself on the “appropriate footing” to work with him going forward.

Councillor Peter Hebden, County Councillor and Borough Councillor for Hatfield East, who has worked tirelessly on behalf of the residents of Ashley court, will also attend the meeting.

Cllr Hebden said of the recent good news: “This is a fantastic step forward for the residents. There are other issues to be resolved but if Sanctuary Housing are adopting a new resident-focussed stance then I’m a lot more optimistic”.

Mr Shapps gave his own thoughts on the matter adding: “This is a great result for the residents of Ashley Court, and I’m incredibly happy to have been part of the effort to facilitate it.

“As Councillor Hebden has said, this is a step forward for the residents, and I’m sure that our meeting with Sanctuary Housing will yield further results.

“Putting residents in such an unfair situation was unacceptable, so I’m hoping that this outcome will go some way to putting their minds at ease.”