Essendon turns out in force to Shapps’ Internet Public Meeting 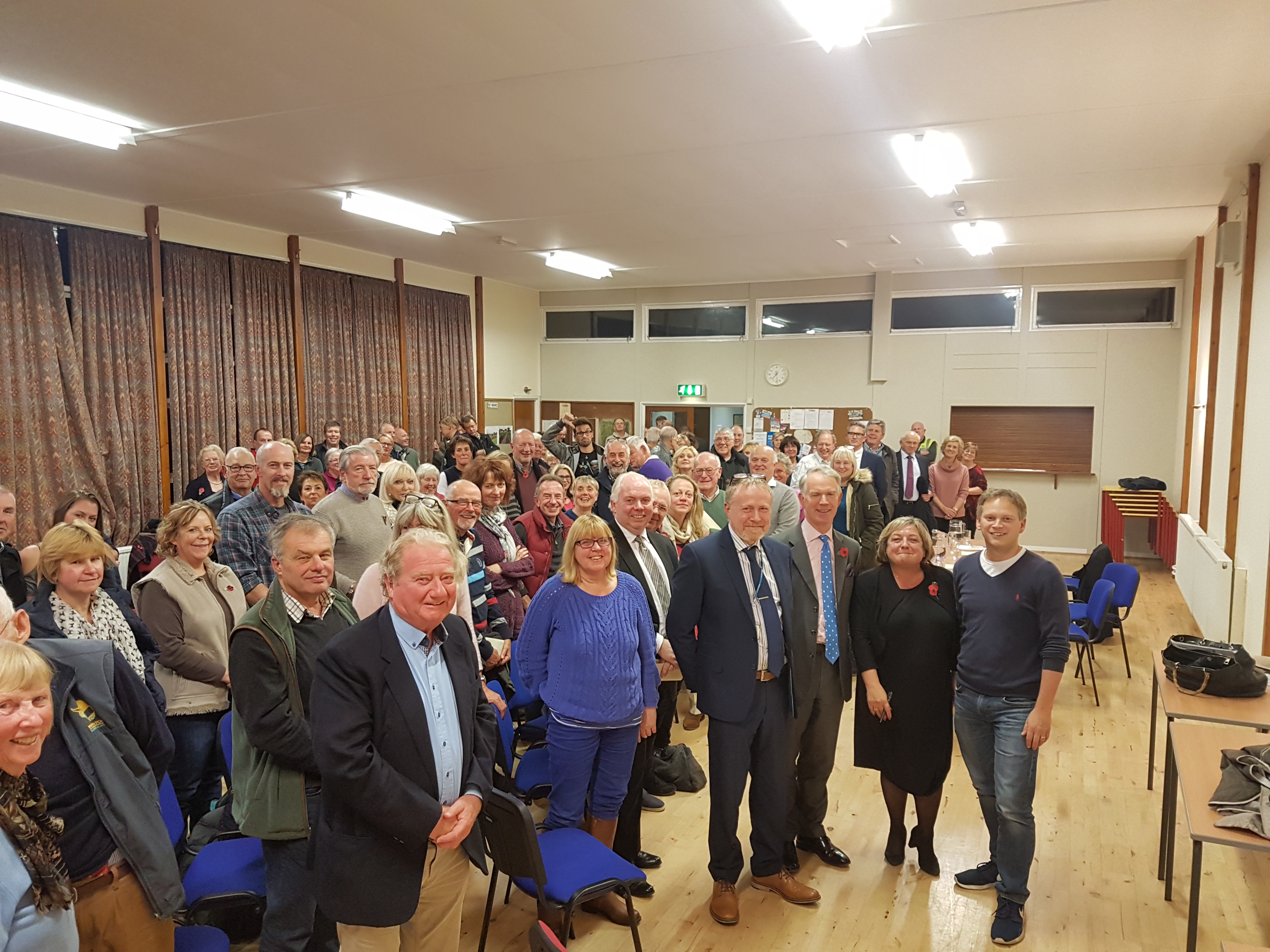 Essendon Village Hall nearly ran out of chairs as an unexpected 150 locals crammed into the village hall for a meeting convened by Grant Shapps MP. The event which was held on Thursday 3rd November, was a lively affair with Grant chairing a panel of senior representatives from BT, Openreach and Herts County Council.

During the meeting it became clear that a large number of residents currently had unacceptably poor internet connections, with a significant portion of the attendees experiencing download and upload speeds below 2megabits and many with less than 1mbps. At the meeting local representatives from BT explained their current work to roll out broadband coverage across the country, and talked candidly about the problems they faced in Essendon, which is geographically located a long way from both the Hatfield and Potters Bar phone exchanges. At the meeting BT and the County Council promised to continue to explore options to find a solution to this meeting, including investigating an opportunity for a match funded community financing arrangement.

During the meeting, Grant requested that local people contacted him at Grant@shapps.com to confirm their own internet speeds using a speed checking website such as www.speedtest.net. This additional data will allow him to build an exact case by case picture of the internet picture, which he can highlight to BT and the County Council.

Grant commented, “As Chair of the British Infrastructure Group of MPs (BIG) I launched a report back in February which explained how the UK broadband situation requires improvement. At the meeting, senior people from BT and Openreach got to hear about these problems first hand. We had indicated about 30 residents would be present, but such is the scale of the Essendon broadband problem that 150 turned up on the night. Using the detail speed test that each homeowner is sending through to me, we will now work with Openreach to map out exact internet speeds and I will be pressing Openreach and the County for an Essendon broadband solution.

“For most people in Britain access to the internet, is simply taken for granted, and is as normal as running water and electricity. It is shocking that in a village so close to the nation’s capital contains hundreds of local people living in homes, with in practice nearly non-existent Internet access. This is an unacceptable state of affairs and the vast turnout at the meeting shows that local people want action.

I would like to thank BT and the County Council for their positive approach and candour during the meeting and local forward to working with them to find real solutions to the problems experienced by residents in Essendon.

I would like to assure local people that I will not rest until the residents of Essendon and every other part of my constituency has the internet access they deserve.”

“We have been working hard on the Connected Counties roll out in the county. The programme recently announced the successful completion of the first stage of its broadband rollout, on time and under budget, and phase 2 is already underway. When our own commercial fibre broadband programme is also included, it means that around 420,000 Hertfordshire homes and businesses now have access to high speed fibre broadband.”

However we of course recognise there is more for us to do, and are committed to working with the residents of Essendon to find a broadband solution.”

Notes:
Grant chairs British Infrastructure Group of MPs (BIG) and the Broadbad report can be downloaded from www.BritishInfrastructureGroup.uk

Attending the event was: